The Nobel Prize winning economist Joseph Stiglitz is relatively unknown outside of academia and policy circles. From Bretton Woods and George Soros to Cooper Union and Barack Obama, this World Banker is part of the roundtable.  Meet the person who scripted Occupy Wall Street. What is the agenda of OWS?

"Americans have been watching protests against oppressive regimes that concentrate massive wealth in the hands of an elite few. Yet in our own democracy, 1 percent of the people take nearly a quarter of the nation’s income—an inequality even the wealthy will come to regret." (This Vanity Fair Article in May 2011 is a blueprint for arguments to come.)
Joseph E. Stiglitz 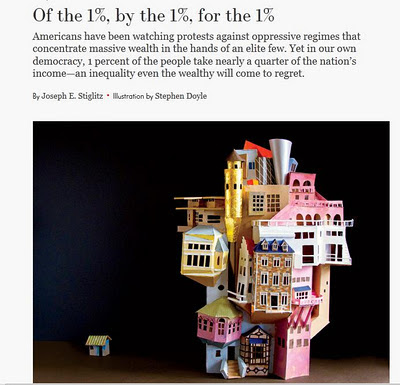 "Mr. Stiglitz, a former chief economist at the World Bank who spent time in the White House as an adviser to President Bill Clinton, thinks he knows the answer. He writes that Mr. Obama surrounded himself with an economic team whose members -- Ben S. Bernanke, the Federal Reserve chairman; Timothy F. Geithner, the Treasury secretary; and Lawrence H. Summers, the director of the National Economic Council -- have been reluctant to revamp the financial system.
Mr. Stiglitz says that these are some of the same people whose policies brought us the economic collapse of 2008."  OFF THE SHELF; What Happened To Regulatory Reform?  January 2010

Fannie Freddie 2002 Report- (Changing the Risk Metric)
"Since their introduction in 1988, the Basel Accords have gained currency as a framework for prudent risk management for financial institutions. Central to these standards is the idea that capital should protect financial institution solvency against unforeseen, even unlikely, losses. One way to evaluate capital adequacy is to subject the institution to the economic equivalent of an engineering stress test — apply severe and sustained pressure to see whether the entity can withstand the strain. Even the reformed Basel standards do not contemplate stress testing for any of the three common sources of financial institution failure: interest-rate, credit and operations risk — and, indeed, do not include interest rate risk at all.
In contrast, Fannie Mae’s and Freddie Mac’s risk-based capital requirement subjects the company to a decade-long “nuclearwinter” scenario along the interest-rate and credit risk vectors and adds a 30 percent safety cushion for operations risk. If the company can withstand the rigors of such punishing and rare strain, the likelihood is that its capital is more than adequate to its risk. And the rarer the probability of the scenario, the more likely is the adequacy of the company’s capital.
So how rare is the scenario in the test?
In 1997, former Federal Reserve Chairman Paul Volcker wrote that the possibility of default if Fannie Mae met the test was “remote.” To update that analysis, we commissioned Joseph Stiglitz (2001 Nobel Prize winner in economics), Jonathan Orszag, and Peter Orszag to examine the likelihood of the risk-based capital scenario. Their econometric analysis found that the probability of the stress test scenario is conservatively one in 500,000 and may be smaller than one in three million. As a result, they find that the risk of a default by these companies, if they hold sufficient capital to meet the stress test, is “effectively zero.” "

The conclusion contained this summary of risk (Expand Freddie to profit government as banks were already too big to fail)
"First, analysis of the risks posed by Fannie Mae and Freddie Mac must carefully consider the alternatives. In the absence of Fannie Mae and Freddie Mac, mortgage risk would likely be held by large banks and other types of financial institutions, which themselves benefit from the perception that they are “too big to fail.” Fannie Mae and Freddie Mac are among the largest financial institutions in the country. Even in the absence of a GSE charter it is likely that they would continue to benefit from their size, since the government has intervened on behalf of other large institutions in the past.21
Secondly, and more broadly, Fannie Mae and Freddie Mac would likely require government assistance only in a severe housing market downturn. Such a severe housing downturn would, in turn, likely occur only in the presence of a substantial economic shock. Regardless of the structure of the mortgage market, the government would almost surely be forced to intervene in a variety of markets — including the mortgage market — in such a scenario. Fundamentally, given the public’s aspirations to homeownership and the myriad ways in which government ubsidies are channeled to homeownership, the government is indirectly exposed to risks from the mortgage market regardless of the existence of the GSE" Stiglitz - Orszags - Fannie Freddie-2002 Report

"What's more, he says, Americans need to get over the idea that higher taxes and more government involvement in the economy are a recipe for disaster. He points to Sweden as an example of a country that has a thriving economy but still provides its citizens with extensive social services.THESE may all be worthy ideas. But at times, Mr. Stiglitz's call for a new economic order seems a bit fanciful. Can you imagine President Obama going before the American people and telling them they need to emulate Sweden? Imagine the fun Glenn Beck would have with that."  OFF THE SHELF; What Happened To Regulatory Reform?  January 2010


Here is a Meeting in Bretton Woods to discuss designing a new World Bank and IMF.Prime Ministers, bankers and economists discuss the future.

While not complete, this is the basic background of the father of Occupy, and supporter of Obama in 2008  A great rebuttal piece to Stiglitz's Vanity Fair artticle  http://www.americanthinker.com/blog/2011/04/vanity_fair_test_marketing_the.html

What is at stake? The OTC 595 TRILLION DOLLAR derivatives market, politicians and regulators 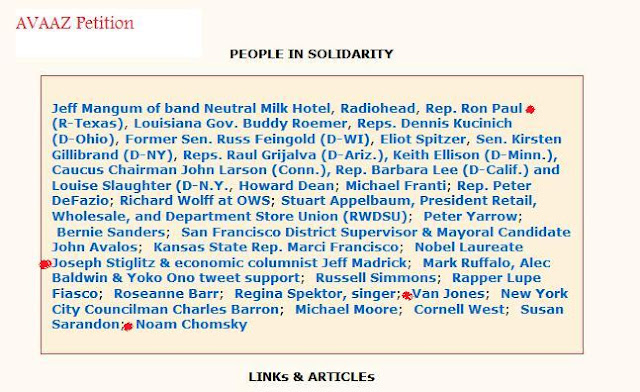 Masstpc.org Coalition
Unions and gay right groups provide the ground game and organization for OWS. What do they get in return?
See the  Attack at Occupy Oakland. Scott Olsen, Marine Vet attacked by Anarchists at Occupy Oakland  that was blamed on POLICE. Occupy is supported by the media. Notice the amount of press present.

Posted by BoogieFinger at 5:23 AM